Bound for the Hall 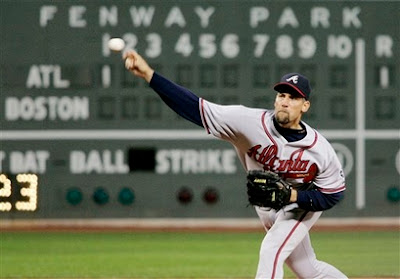 Forty-year-old John Smoltz pitched seven shutout innings tonight to give the Braves a 2-1 victory over the Mets, bringing Atlanta within a game and a half of the New York in the NL East.

The win was Smoltz’s seventh of the season, which leads the National League, but more importantly, was the 200th of his illustrious career.

Smoltz became the 106th pitcher in Major League history to reach the 200 win mark, but is the first pitcher ever to get 200 wins and save at least 150 games.

Although milestones probably shouldn’t be such a big deal statistically, they are a big deal in the minds of Hall of Fame voters, and Smoltz almost certainly cemented his place in the Hall with his victory tonight.

I’ve always been a Smoltz fan, partially because he’s the only player who has been around for Atlanta’s entire run of 14 division titles but also because he is one of the nicest players in the game, and I’m glad that he is getting the recognition and acclaim that he deserves.

The Worst Team Ever