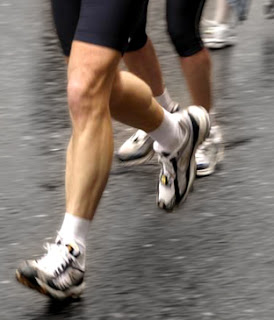 There are few things in life that I hate more than getting into shape.

Being in shape is great, but getting into shape is terrible.

I’m running in a 5K this weekend in Rogers with Caroline, my brother, and some men from church, and because I tend to be somewhat competitive, I’m trying to get into some sort of shape so I don’t get dominated by a bunch of middle-aged men.

Over the last 10 months, I’ve done a shameful job of staying in shape. That’s due to a combination of several factors: I severely sprained by left ankle last August, which prevented me from running for about a month, my work schedule isn’t always conducive to the types of athletic activities that are available to me, I’m somewhat lazy and I also probably eat more now than I did in my bachelor days due to the fact that my wife cooks a lot better than I did/do.

But the biggest reason of all is the change in my lifestyle. When I was in college (not quite as much in my last year, when I was incredibly busy), I was constantly active. I played ultimate 3-5 times per week, played in 8-10 tournaments every school year, participated in club sports, played pick-up basketball a couple times a week, lifted weights every now and then, and some semesters, ran three times a week.

Now that I’m away from college, I don’t have nearly as many opportunities to be active. In fact, for most of the year, the only real opportunity for being active that I have is running by myself, which is something I absolutely hate.

Which leads me to where I am now, struggling to get into shape for this weekend.

Last Saturday I played in a Savage 7 (which means you play without subs) ultimate tournament and Sunday evening I played ultimate with my youth group, which was good for me, but also hard on me to the extent that all my runs this week (I took Monday off and then ran Tuesday evening, yesterday afternoon and this morning) have been awful.

Tonight I have summer league ultimate, and then I’ll take tomorrow off in hopes that by Saturday, my legs will be fresh again and that I’ll have somewhat of a spring in my step for the first time in months.

Basically, what it comes down to I guess is this: if you’re in good shape, congratulations. Stay that way. Because falling out of shape and then frantically trying to get back to where you were is atrocious.

UPDATE: In case I needed more evidence of how out of shape I am, I got burnt deep on game point tonight at summer league. That never used to happen.

If You’re Going To Get Ejected…