Maddux Calls It A Career 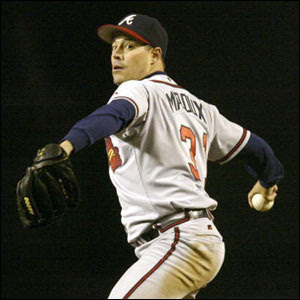 I grew up watching Maddux and the other members of Atlanta’s Big Three, Tom Glavine and John Smoltz, baffle hitters and win lots of games.

Maddux was my least favorite of the three (he arrived in Atlanta last and always seemed somewhat like a hired gun), but he was also the best, and he put up some historically shocking numbers in the mid 1990s.

Really, Maddux was also most representative of the great Atlanta teams of the 90s and early 2000s—an absolute terror over the long course of the season who suddenly became mortal when the playoffs rolled around (Maddux was just 11-11 in the postseason during his 11 seasons with the Braves).

Maddux retired with 355 career victories, 8th on the all-time list and one ahead of Roger Clemens, which I think is significant, and appropriate.

For much of the two pitchers’ careers, the debate raged about which was the greatest pitcher of the era. Over recent years, the argument had tilted in favor of Clemens, who continued to be one of the best pitchers in the game while Maddux increasingly looked like a 40 year-old who used to be good (eerily similar to what happened with Barry Bonds and Ken Griffey Jr.).

Of course, then all the allegations of Clemens’ steroid use came out, and Roger joined the ranks of Bonds, Mark McGwire and the rest of the baseball stars who have fallen from grace.

And his sudden distancing of himself statistically from Maddux late in their careers made a lot more sense.

Clemens (like Bonds) was a great player who possibly could have been the best of his era, but Maddux (like Griffey) came by his numbers cleanly and deserves the distinction instead.

And really, maybe that would be the most fitting legacy of all for the Steroid Era.

Abortion, Part 4: Why Abortion Is A Deal Breaker