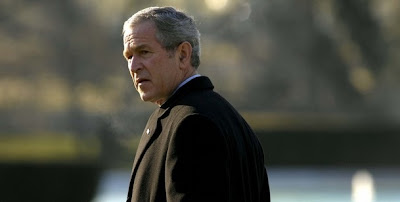 George W. Bush, the 43rd President of the United States, is president no longer.

Bush’s time in office has been hectic, and his second term has been characterized by the continuation of an unpopular war, a faltering economy and sagging approval ratings.

For the most part, I don’t think Bush has been given a fair shake.

Sure, I don’t agree with everything he’s done, but he’s also had a lot to deal with. From the most threatening attack on American soil since Pearl Harbor, to a crippling hurricane, to a vice president who accidentally shot someone in the face, President Bush couldn’t really get a break.

From the beginning, people have claimed that he was an idiot because of his famous misstatements, and I’ve mentioned before that I think that’s unfair. Bush actually scored a very respectable 1206 on the SAT, and based on that score, his IQ has been estimated to be around 125, which would put him in the top 10-15% (and therefore, more intelligent than the vast majority of people who make fun of him).

And much has been made about his low approval ratings, but I think we should be pretty careful about judging the success or value of someone based on the fickle feelings of the mob. Abraham Lincoln was an unpopular president as well, but with the benefit of historical context, he is considered by many to be the greatest president in our history (I’m not saying that Bush is the equal of Lincoln, but he’s certainly not the abject failure that he’s been made out to be either).

At the end of the day, whether you agreed with him or not, I think there is one undeniable fact about the presidency of George W. Bush: he made his decisions based on what he thought was the right thing to do, not what would make him popular.

That’s an admirable characteristic. It’s a characteristic that we generally try to instill in our children. And one that is pretty rare amongst politicians.

So goodbye President Bush, and thank you for your service. I tend to think that history will be kind to you. Certainly kinder than we have been.