Pity for Those Who Do Not Know: The Story of Jonah, Part 3 If you’re coming late to the party, be sure to check out Part 1 and Part 2.

So far, we’ve seen that Jonah was pretty mixed up about what was important—he valued a plant which provided him with shade more than he valued the lives of the people of the great city of Nineveh. We’ve also seen that as the people of God, we can get similarly mixed up.

God’s response to Jonah at the end of chapter 4 is an attempt to correct Jonah’s perspective on things. He says,

“You pity the plant, for which you did not labor, nor did you make it grow, which came into being in a night and perished in a night. And should not I pity Nineveh, that great city, in which there are more than 120,000 persons who do not know their right hand from the left, and also much cattle?”

God tries to get Jonah to see how He pities the people of Nineveh. A lot of time we have a negative connotation with the word “pity”, but it really just means to feel sorrow over someone else’s condition (The New American Standard Bible says “compassion”; The NIV uses “concern”). God points out how ridiculous it is that Jonah felt sorrow over the death of the plant, but feels no concern at all over the 120,000 people of Nineveh “who do not know their right hand from their left”—basically, people who don’t even realize how bad of a spiritual condition they are in.

It’s interesting—the Book of Jonah ends with God’s question. We don’t get to hear how Jonah responded; we don’t get to see if he corrected his attitude. But really, that makes sense, because the Book of Jonah isn’t really about Jonah—it’s about God…and God’s concern for all people…and God letting His people know about how much He is concerned for all people! So it makes sense that the book ends with God sharing that concern with Jonah.

It is our understanding of God’s pity for the lost—His feeling of sorrow for their condition—that can provoke a similar sense of concern in us. You know, a large part of Jonah’s problem was that he didn’t understand the value of the Ninevites. To him, they were worthless, less deserving of his concern than a plant which sprung up overnight.

What about us? Do we understand the value of those who are lost?

Most of my readers know that I am a huge baseball fan, and when I was younger, one of my favorite hobbies was collecting baseball cards. I would spend most of my allowance buying packs of cards, I would collect and trade for my favorite players, and I would spend a lot of time looking at and organizing my cards. 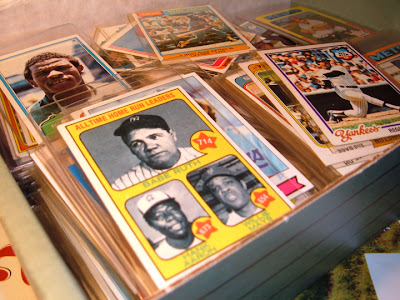 Another thing I would do with my baseball cards was try to figure out how much they were worth. They would put out price guides every month that would supposedly tell you the value of each card. I remember I would look up my cards and I would take them and brag about it to my dad: “Look Dad, this card is worth $2; this one is worth $5; this one is really rare—it’s worth $30!”

My dad was never impressed with my claims though, and I remember that he would always look at me and say:

“Son, that card is only worth what someone will pay for it.”

You know, that definition of value makes a lot of sense to me. And if the value of something is determined by what someone will pay for it, God made it abundantly clear for once and for all that the lost are worth more to Him than anything—because He paid for them with the death of Jesus on the cross.

That price was paid even for folks whom we don’t like very much, people who make us uncomfortable, or people who have hurt us in some way.

That price puts all of the distractions in our lives—the other things that seem so important to us—into perspective.

As I said at the beginning of this series, I’m really not a big fan of Jonah, because he reminds me too much of myself:

Maybe some of you can understand where I’m coming from.

Fortunately, the God who is gracious and merciful, slow to anger and abounding in love with the Ninevites is also that same way with me. Fortunately, that same God decided that my soul was worth enough for Jesus to come and die for it.

Pity for Those Who Do Not Know: The Story of Jonah, Part 2