Wanted: Role Players in the Body of Christ 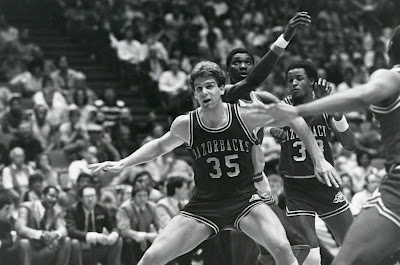 Joe Kleine was one of the best basketball players in Arkansas Razorback history. An All-Conference Selection in 1984 and 1985, and Kleine also played on the 1984 Gold Medal U.S. Olympic team. In a game against the 2nd-ranked Houston Cougars in 1984, Kleine led the Razorbacks to victory, snapping Houston’s 31-game conference winning streak and outscoring future Hall of Famer Hakeem Olajawon 22-10. During his career at Arkansas, Kleine averaged 18 points per game—more than Michael Jordan averaged during his career at the University of North Carolina.
But, after completing his collegiate career and joining the NBA in 1985, Kleine went from being a stand out all-star to an average, back-up, role player. In the late 80s and early 90s, Kleine played for the Boston Celtics. While he was there, he was overshadowed by a number of very famous and very good players—Larry Bird, Kevin McHale, Reggie Lewis, and Robert Parrish. Parrish in particular overshadowed Kleine, because Parrish played the exact position that Kleine did—center. Robert Parrish is considered by basketball experts to be one of the greatest centers who has ever played the game, so Joe Kleine got to be Parrish’s backup.
It’s not easy being a backup, a second teamer. Backups are called things like “substitutes” and “bench-warmers” and “role players”. Backups don’t get to play on the Dream Team; they don’t get to play in All-Star games. Their basketball cards aren’t worth very much, and they don’t get to make many commercials. It would seem that being a backup isn’t a very important job.
Nothing could be further from the truth, however. Consider the following description of Joe Kleine from an article by a Celtic sportswriter a few years back:

“He is what he is. And he knows exactly what that is—the backup center on an NBA team. Every NBA team would love to have Kleine be what he is, which, in addition to being a competent NBA center, includes being a first-rate person.”

The article goes on to quote one of Kleine’s former coaches:

Why is Joe Kleine, a second-string backup center, the kind of player that every coach wants on his team? Why is he the kind of player that coaches don’t want to give up? Because he is willing to accept the role he is given, and give his best performing that role, even if it is not exciting or glamorous.
Paul talked about role players in 1 Corinthians 12.14-18:

We don’t each fill the same role, but Paul goes on to tell us that we each have a role to fill. Moreover, he tells us that God bestows an extra measure of honor upon those who fill roles that seem unglamorous:

“The eye cannot say to the hand, ‘I don’t need you!’ And the head cannot say to the feet, ‘I don’t need you!’ On the contrary, those parts of the body that seem to be weaker are indispensable, and the parts that we think of as less honorable we treat with special honor. And the parts that are unpresentable are treated with special modesty, while our presentable parts need no special treatment. But God has combined the members of the body and has given greater honor to the parts that lacked it, so that there should be no division in the body, but that its parts should have equal concern for each other.”

Just as role players are an integral part of any NBA team, they are also indispensable within the church. Unfortunately, this is often a difficult lesson for Christians to learn. Even some of Jesus’ apostles struggled with this concept—in Mark 10, James and John asked to sit at the right and left hand of Jesus so that they could receive special recognition. This request was made because they did not understand the role that God had given them. In Mark 10.43-45, Jesus explained to them that “whoever wishes to become great among you shall be your servant, and whoever wishes to be first among you shall be slave of all. For even the Son of Man did not come to be served, but to serve, and to give His life as a ransom for many.”
Are you willing to be a role player in the Body of Christ? Because that’s the kind of player that God is looking for on His team.