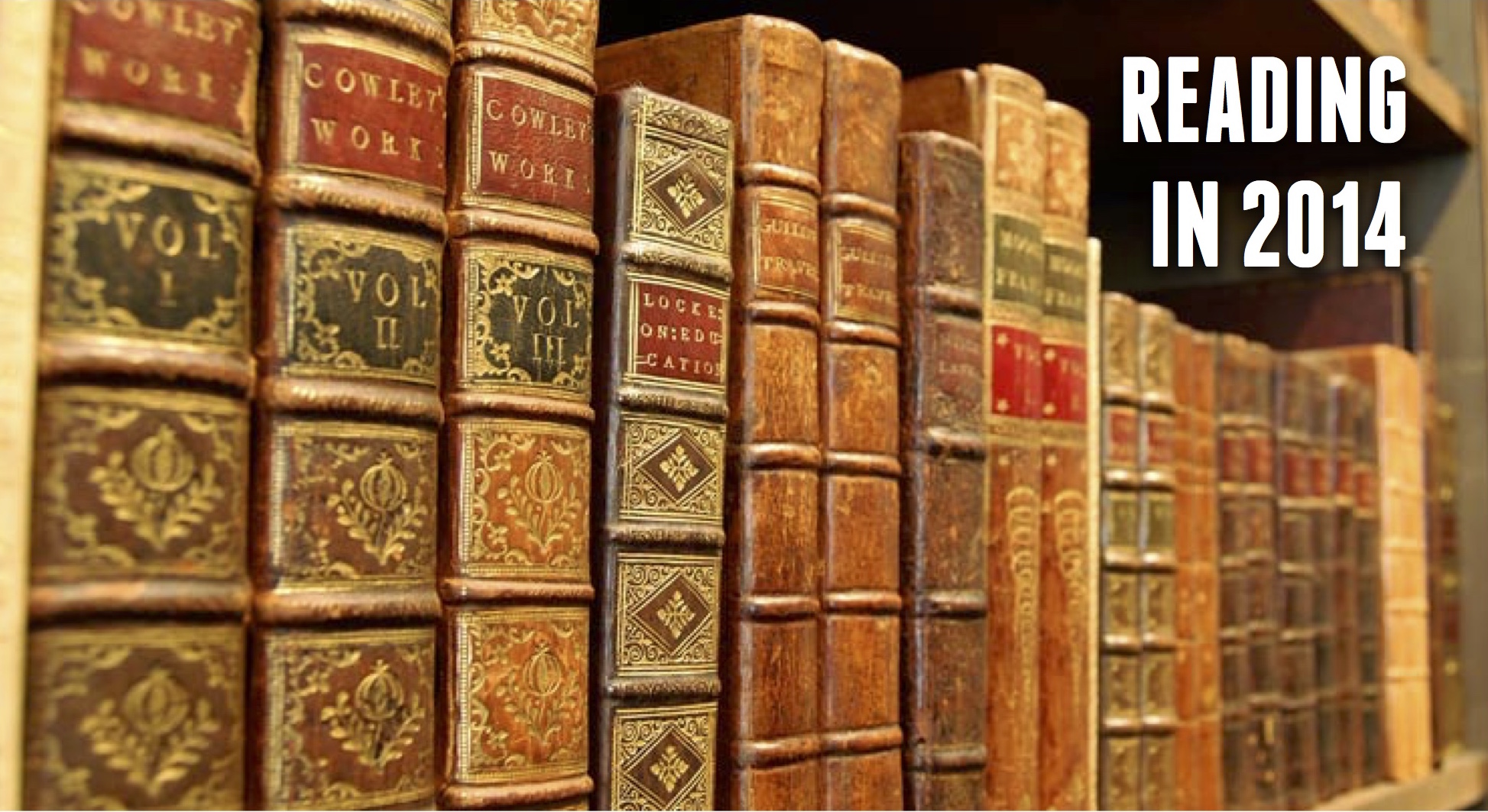 Those who have followed this blog for a while know that I keep track of the reading I do and then at the beginning of each new year, post the list of the previous year’s reading. For some reason, this is something I enjoy doing, and others seem to enjoy it as well.

In 2014, I continued reading eBooks on occasion (something I hadn’t done much before 2013), and I also increased the frequency with which I listened to audiobooks. Also, a lot of my list (38 of 54 I think), centered on theology, Christian living, ministry, Bible study, and church history. Given my vocation and studies, this is not surprising.

First, I read through the ESV Single Column Journaling Bible this year. I wrote about this bible earlier in the year, and I really couldn’t be more pleased with my decision to do my personal Bible reading out of it in 2014. It is a great product: the ESV is a good translation, the strap is handy for keeping it closed and tucking a pen in for taking notes, there is ample space for writing, and there is a good reading plan in the back. I have a ton of notes I made and insights I recorded in the margins, and even though I fell behind in blogging some of this, I know my journal notes will be helpful to me for years to come.

Backgrounds of Early Christianity by Everett Ferguson is a classic in its field, and I can see why. Ferguson writes clearly and with great scholarship, and provides invaluable background information on the context and culture of the early church. I wrote a review of Seven Congregations in a Roman Crucible: A Commentary on Revelation 1-3, by Richard Oster. I thought it was an outstanding book, and mention it in conjunction with Ferguson’s book because Seven Congregations also excels at providing background information which helps the reader to better understand the context of the Book of Revelation.

N.T. Wright’s Surprised By Hope: Rethinking Heaven, the Resurrection, and the Mission of the Church is well-known, and I was glad that I finally got around to reading it. Wright is brilliant, but is able to write in an easy-to-understand way. I shared a couple of quotations from the book which I enjoyed. Overall, I thought Wright had a lot of good things to say, but I wish we would have done a little more work grounding his view of a renewed and transformed earth as the location of “heaven” (I know he does that elsewhere, but I wish he would have spent more time on it in Surprised By Hope as well).

A couple of books related to doctrinal issues and Christian fellowship which I really appreciated were Ross Cochran’s Not Off Limits: Questions You Wish You Could Ask at Church, and F. LaGard Smith’s Who Is My Brother? Facing A Crisis Of Identity & Fellowship. I thought the greatest strength of Cochran’s book was his tone: as we address controversial issues in our churches, it is vital that we recognize that sometimes there are multiple possible interpretations on a given issue, and that even people with whom we disagree can be sincere people who are doing their best to understand and follow the Bible. The big takeaway from Smith’s book is his proposal for different levels of fellowship: I don’t agree with all of his conclusions, but on the whole I thought his approach was very insightful.

I took a class this fall on Providence and Suffering, and read a lot of books related to that topic. Yet Will I Trust Him: Understanding God In a Suffering World by John Mark Hicks (who, incidentally, was also my professor) was a really good look at the issue of suffering in the world. I think I would have enjoyed the book even more if I had read it straight through; instead, I ended up reading it in chunks as they were assigned in class. Hurting With God: Learning to Lament with the Psalms by Glenn Pemberton was perhaps the best book I read this year. It focuses on lament in Scripture, specifically in the Book of Psalms, and makes the argument that in our modern churches we have largely lost the ability to lament and, as a result, superficialized our relationships with one another and with God and, therefore, weakened our faith. I loved the book, have preached from it, and hope to share some quotations from it later. Also, for that same class, I re-read William Young’s The Shack. I had originally read it back in 2009, and posted some thoughts after doing so. Interestingly, I don’t really disagree with those thoughts, but on the whole, I appreciated The Shack much more this time than I did back in 2009. Perhaps my life experience since that time and the contact with suffering I have had has something to do with that.

For books in no way related to ministry or theology, the highlight of my reading year was definitely the Harry Potter series. For years I have had people (specifically my wife) tell me that I should read these books, but I knew that there were seven of them, that the last ones were very long, and I simply did not have the time (I am very busy and don’t have a lot of spare time for pleasure reading). However, one segment of my day that I always felt was wasted was the time I spend driving in my car. Caroline suggested that I try listening to the Harry Potter books in audio format, and I did that this year. The books are entertaining and well-written, and it made driving much more enjoyable for me. I’m actually sad that the series is over and am looking for something else to listen to in the car.

My overall book total increased from 50 in 2013 to 56 in 2014. I really did not expect to exceed my total from last year. Last year I had pushed to get 50 and since it stressed me out a little, I decided this year I would just read and let the total be what it may. Interestingly, with this approach I still ended up with more.

I got some great books for Christmas, and I have a long to-read shelf filled with books I am excited about. What were your favorite books from 2014?