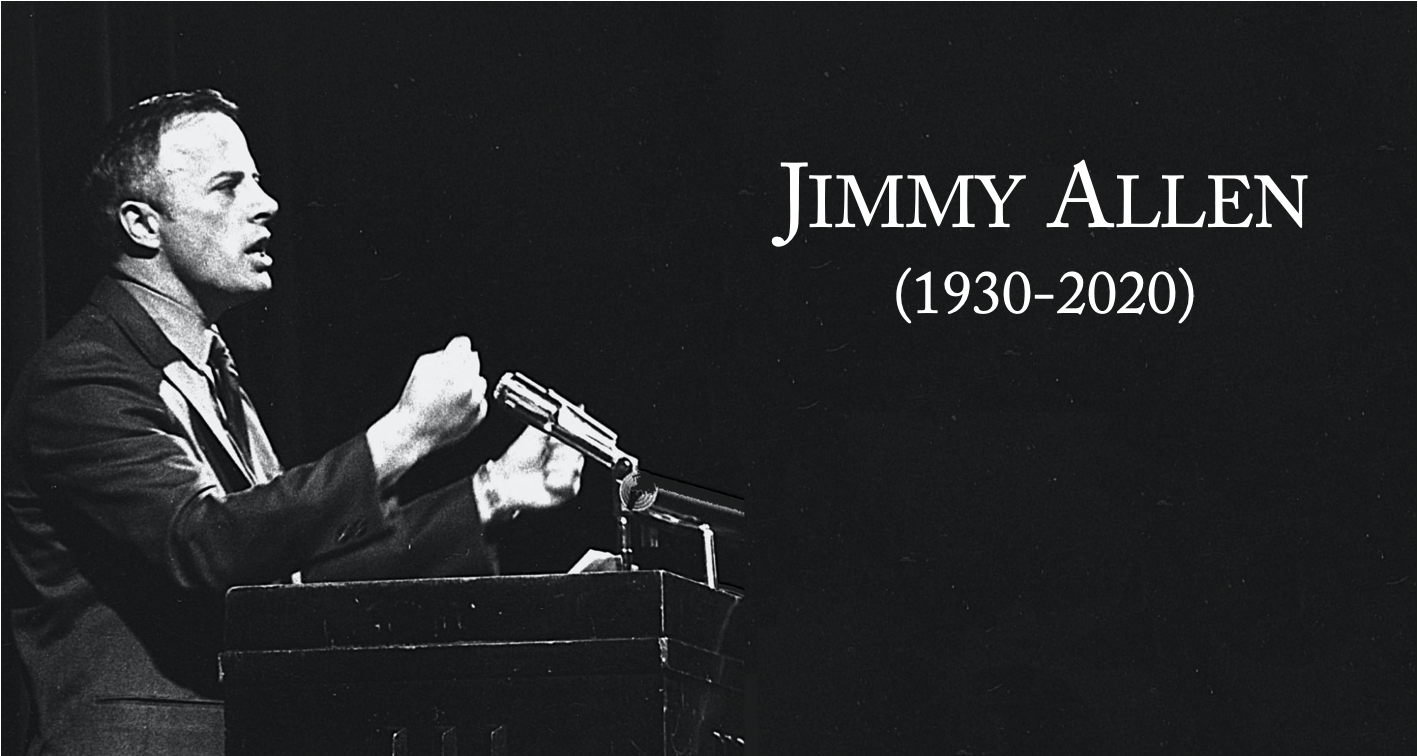 I was saddened to hear that Jimmy Allen, well-known evangelist and long-time Bible professor at Harding University, passed away early yesterday morning. He had been in poor health for some time, so his passing was not a surprise, but still, I feel that the world has been made a dimmer place by his absence.

Allen was best known as an evangelist, and specifically, was a revivalist in the style of Billy Graham. In the 1960s and 1970s, he held a series of citywide gospel meetings, preaching to thousands and thousands in coliseums and sports stadiums. It is estimated that his evangelistic efforts led to over 10,000 baptisms.

Within the Harding community, however, Allen was also well-known as a Bible professor, and it was in that role that I knew him best. Dr. Allen was one of three absolutely outstanding Bible teachers that I had at Harding who made a profound impact upon my life (another was Neale Pryor, who I wrote about after his passing in 2011). By the time I came to Harding in the early 2000s, Allen’s style of fiery preaching was not popular with college students, but he seemed to be universally loved by those who had him as a teacher, and this despite the fact that he was notorious for rarely giving out A’s (the running joke was that the Apostle Paul couldn’t swing better than a B+ in Allen’s Romans class).

When I took Allen’s Romans class (and, also, when I read his autobiography, Fire In My Bones), I learned so much. Here are some lessons that have stayed with me:

Burden for the Lost

The driving passion of Jimmy Allen’s life was telling people about Jesus. He did not hide the fact that he had lived a prodigal sort of life before giving his life to Christ, but once he made Jesus the Lord of his life, he was obsessed with telling others about Him. There are so many stories of Allen taking advantage of “captive audiences” (friends in his fishing boat, even hitchhikers in his car!) and converting them to Christ. Allen didn’t consider himself to be a preacher (he would say, “I’m not a preacher, I’m a school teacher!”), but he felt that it was his mission to share his faith and it was unfathomable to him that so many other Christians didn’t seem to feel the same way.

I well remember an idea that Allen repeated often:

“You don’t learn anything about a Bible subject by reading a verse where it is not mentioned.”

This, perhaps, seems obvious, but people neglect this sound advice all the time. For example, if you want to know what baptism accomplishes, you need to read the various passages that talk about baptism and what it does. It is poor biblical interpretation to read passages that don’t mention baptism and then infer ideas about baptism from its absence.

Believing the Best of Others

I don’t remember the specific context, but it was in his Romans class that Allen said these words that I’ll never forget:

“If I hear something bad about someone, I never believe it. If it comes to the point that I have no choice but to believe it, I do not delight in it.”

These words have become a standard for my life. I do not always abide by them perfectly, but this is the goal that I seek. In an increasingly graceless cancel culture that pounces on the misdeeds of others and seeks to write them off, these words obviously represent a different path, but I believe it to be a path of profound wisdom.

In Fire In My Bones, Allen shares several areas in which his views have changed over the years. He introduces that chapter with these words:

“A brother who says, “I haven’t changed any of my Biblical views in the last twenty five years,” has not had his head in the Bible. Furthermore, he would make a stagnant, mosquito-infested, mud hole look like fresh water! In teaching others, we are continually asking them to change from error to truth. We should be willing to practice the same.” (201)

This idea has played out in my own life: the more I study Scripture, the more my understanding of it grows. Some beliefs are anchored more deeply, others are nuanced and refined, and still others are changed significantly, as I learn new things that I didn’t know before. Like Allen, I am deeply suspicious of those who hold their never-changing ideas up as some sort of badge of pride.

In his younger days, Allen was an impressive athlete. I remember he used to tell us that when he was in college, he could run the 100-yard dash in 10 seconds flat, and there are all sorts of stories about his exploits on faculty teams in intramural sports. When I had him as a teacher, he was in his 70s, but I would still see him jogging outside.

In Romans class, I well remember his exposition of Romans 8.18-25, and his discussion of the resurrection body. Well aware of his own decaying body that no longer could do the things it once did, he eagerly anticipated “the redemption of our bodies” (v. 23), and the splendid and powerful body that he would have post-resurrection. His emphasis on bodily resurrection as the center of Christian hope was re-orienting for me, and remains influential in my own views; his teaching on the redemption of creation (from the same passage) was a significant influence in my understanding of eschatology that has developed over the last several years.

In addition to what I mentioned above, Allen was also noteworthy for his teaching on grace at a time when that had not been properly emphasized, his commitment to racial equality in a time of segregation and racial tensions, and his dedication to a nonsectarian Restoration ideal. In short, he was an impressive and inspirational man in a lot of ways.

For a man who was so active and had such a brilliant mind, I cannot imagine how frustrating the last few years must have been: from what I understand, he was confined to a nursing home, in declining physical and cognitive health.

Echoing the words of the Apostle Paul, we can truly say that for a man whose life was Christ, his death is gain: Jimmy Allen is now with Jesus, and he awaits the resurrection. But at the same time, we can lament, for death is never a good thing; it is not a part of God’s plan. It is an enemy, indeed, the last enemy to be defeated. But as Christians, we believe that it will be defeated, that our bodies will be raised, and our lowly, corruptible bodies will be transformed and become like Christ’s glorious, incorruptible body. Jimmy will enjoy that; he has long anticipated it.