As any regular readers of The Doc File know, I am a huge fan of Jackie Robinson. In addition to being a world-class athlete, Hall of Fame baseball player, and, behind Martin Luther King Jr., the most influential player in the American Civil Rights Movement, he was also a man of great personal character.

I recently came across the photo at the top of the page of Jackie on the base paths. It’s a picture I love because I think it so well captures two of Jackie’s characteristics which were integral to his success and are also necessary in the daily life of the Christian: daring and determination.

Integrating Major League Baseball left Robinson open to constant torment and abuse. Racist fans heckled and berated him constantly, opposing managers would threaten not to play the Dodgers if Jackie was in the lineup, and baserunners from other teams would try to spike him with their cleats. None of that was a surprise—Dodgers GM Branch Rickey had warned Robinson in detail of the kind of abuse he would face if decided to take part in the “Great Experiment” and become the player to break the color barrier in Major League Baseball—but Jackie Robinson was willing to take the risk.

In addition to his daring in integrating the big leagues in the first place, Robinson was also daring in the way he played he game. Bringing the style of the Negro Leagues to Major League Baseball, Robinson was a terror on the basepaths, stealing bases, distracting pitchers, and stealing signs.

Christians need to be daring as well. To a large degree, I believe a Christian’s influence in the world is nullified when she or he refuses to be daring. Doing things that make you feel uncomfortable like sharing your faith with a friend or co-worker or taking an unpopular moral stand when others refuse to requires daring. Being willing to attempt great things that you’re not sure you are capable of doing like adopting a child or teaching a Bible class also requires daring. Attempting to fulfill the mission given to us by Christ of seeking and saving the lost requires a great deal of daring!

Author John Augustus Shedd once famously said, “A ship in harbor is safe, but that is not what ships are built for.” It is a great quotation! Too often, I think that Christians look at the church as a safe harbor, and because they like the safety, they fail to venture outside of its (figurative) walls. Certainly the church is a safe place, but it should be a place where Christians are equipped to engage, change, and save the world, not where they can hide from it.

It’s not “safe” out in the world, but it is where our light is most needed. Christians must be daring!

In the picture above, the look in Jackie’s eyes oozes focus and determination. On the basepaths, he was completely locked in to his psychological and physical battle with the pitcher, and was determined to defeat him.

It’s interesting—baseball really wasn’t Robinson’s best sport. In college at UCLA, Jackie lettered in four different sports. In track and field, he won the national championship in the broad jump in 1940. In football, he led the nation in punt return average in 1939 and 1940 and led UCLA in rushing, passing, total offense, scoring, and punt returns in 1940. In basketball, Robinson led the Southern Division of the Pacific Coast Conference in scoring in both 1940 and 1941. Baseball was his fourth best sport!

Later on, after spending some time in the military during WWII, Robinson honed his baseball skills playing in the Negro Leagues, but here’s the point I’m getting at: I’m really not sure that Jackie Robinson should’ve been a Hall of Fame caliber baseball player, but he was just so determined to succeed! Robinson knew that he carried the weight of the hopes of Black America on his shoulders, and he was determined that he would not let them down. So his determination led to great success.

Christians also need to be people of determination. You can’t accidentally live a faithful Christian life—it requires the determination on a daily basis to live a life of discipleship regardless of cost or consequence.

That’s counter-intuitive for us today (especially the part about cost or consequence) because we live in a consumer culture where different products are constantly vying for our attention and loyalty—if you’re not losing enough weight on your diet, quit it and try a new one. If you don’t like your cell phone plan, drop it and switch over to a competitor. If going to church doesn’t seem to be improving the quality of your life, cut it out and try something else…when taken to the extreme, we become people devoid of commitment or determination, and, quite simply, people who give up too easily.

It is not easy to be a Christian, but Jesus never promised that it would be. Faithful discipleship requires determination!

Jackie Robinson’s ability to change the world certainly involved his natural talents and abilities, but equally if not more important were his character traits of daring and determination. If Christians, as citizens of the Kingdom of God are going to engage the world and change it for good, then we have to possess those same characteristics in abundance. 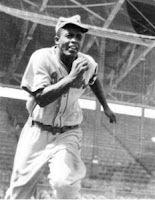 Baseball historian John Thorn has written a fascinating article on a forgotten piece of baseball history—Branch Rickey’s master plan to integrate Major League Baseball.
Of course, we know the integration of MLB through the collaborative efforts of Rickey and Jackie Robinson was an unqualified success, but it didn’t go the way Rickey originally intended:

“…Rickey had never planned for one black man to deal with all the problems [of integrating the game] alone; he had meant to announce the simultaneous signing of several others.”

You can read the rest of Thorn’s article here.

Guts Enough Not To Fight Back: Jackie Robinson

As a general rule in college and professional sports, teams retire the jersey numbers of the all-time greats who played for them. For example, no Chicago Bull can wear number 23, because that was Michael Jordan’s number and it has been retired. No New York Yankee can wear number 3, because that was Babe Ruth’s number and it has been retired. If you play Major League Baseball, regardless of what team you play for, you can’t wear the number 42, because that was Jackie Robinson’s number, and it is the only number to be retired by Major League Baseball.[1]

Robinson’s Hall of Fame career and the way he handled himself on and off the field opened doors for other black athletes in professional sports (and ultimately many other fields as well), and it has been said that only Dr. Martin Luther King Jr. accomplished more for the American Civil Rights Movement than did Jackie Robinson. Before he signed a contract to play for the Dodgers, Robinson was called into the office of Team President and General Manager Branch Rickey. To give him a taste of what it would be like to be the only black player in the Big Leagues, Rickey spent three hours taunting and insulting Robinson, calling him every racial slur he could think of. Rickey then told Robinson that this is what he would face every day on the field and that if he wanted it to work out, he would have to promise not to fight back or respond to insults of any kind for the first three years of his career.

Robinson, who possessed a fiery temperament and was very outspoken (he was actually court marshaled for refusing to sit at the back of a military bus), was put off by this and asked, incredulously, “Mr. Rickey, are you looking for a player who is afraid to fight back?”

Branch Rickey replied, “No, I want someone with guts enough not to fight back.”

After some deliberation, Robinson agreed to Rickey’s terms, and he lived up to them on the field. When opposing baserunners tried to spike him when sliding into second base, he didn’t fight back. When fans and players yelled and cursed at him and even questioned his very humanity, he showed them how wrong they were by taking the moral high ground.

He had the guts not to fight back.

What Branch Rickey told Jackie Robinson reminds me of Jesus’ words in The Sermon on the Mount in Matthew 5:

“But I tell you, do not resist an evil person. If someone strikes you on the right cheek, turn to him the other also. And if someone wants to sue you and take your tunic, let him have your cloak as well. If someone forces you to go one mile, go with him two miles.”

Jesus wants followers with guts enough not to fight back.

[1] Major League Baseball has established the practice of temporarily lifting this prohibition on April 15 to commemorate the anniversary of Robinson’s first game as a Dodger, as representatives from each Major League team wear number 42 in his honor.