Scripture Reflections 1: “And He Died.”

So as I mentioned before, this year I am doing my Daily Bible Reading out of the ESV Single Column Journaling Bible. This means that I am constantly writing notes and questions in the margin.

I thought it might be worthwhile to share some of my reflections here on The Doc File (my online “journal”), and that occasionally someone might find them to be interesting or helpful. So we’ll see how it goes, but here is the first installment.

If you start at the beginning of the Old Testament, by Genesis 5 you’ve already witnessed a lot of important stuff happen. God has created everything and stamped his image on mankind (Chapters 1-2). He watches in heartbreak as man rejects that image and brings sin into the good creation (Chapter 3). In Chapter 4, sin, already a part of the world, is brought to new depths as Cain kills his brother. And we have some other indications of the progression of sin later in the chapter with the character of Lamech.

And then Chapter 5 recounts the generations following Adam. And genealogies aren’t usually all that interesting to us. These are somewhat novel because of the length of the lifespans recorded, but other than that we don’t think too much about them. But as I was reading this time, I was struck by three words which occurred over and over: “and he died.”

Generation after generation we read about different men—their names, how long they lived, their children—but their stories all end in the same abrupt way: “and he died” (Genesis 5.5, 8, 11, 14, 17, 20, 27). And all of this repetition has a real point: it hammers home the truth that, because of the sin in the Garden of Eden, death is now an inescapable part of the human experience. It was true for the men in Genesis 5, and it’s still true today, thousands of years later, despite all of our technological advances and our obsession with cheating and avoiding death.

And that is truly tragic news. Death is the enemy of all of us and it is a part of our existence because of the results of sin.

And it seems to me, that in Enoch, we have a foreshadowing of the Gospel: for those who have a relationship with God, death is overcome. Not in the way that it was for Enoch (I fully expect to die someday, unless Jesus returns before then), but still, in a True and Eternal sense, the power of death is nullified. It does not get the last say:

Cap Anson was Major League Baseball’s first superstar. Anson spent the majority of his career as a player/coach for the Chicago White Stockings, and was the first professional player to amass 3,000 hits.  Some of the many records he set during his career lasted for decades.

Anson was a fierce competitor, and his accomplishments in baseball were so important to him that he left instructions that his tombstone read, “Here lies a man who batted .300.” 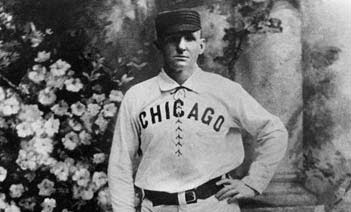 I’m a huge baseball fan and I think it would be neat to play it at the same level as someone like Cap Anson, but to choose to sum up your entire life with a baseball statistic? Even I think that’s a little sad, and it reveals a perspective on life that is more than a little skewed.

Closely related to all of this is the idea of legacy. In legal terms, a legacy is a gift of property or money, usually by means of a will. In a more general sense, your legacy is whatever you leave behind for those who come after you—in some ways it is a token or a synopsis of your life.

If we had the benefit of hearing the epitaphs that others would write for us, it might reveal how skewed our perspectives can be at times (not unlike Cap Anson’s), and let us see that the legacies we leave are often shallow and insignificant.

In Genesis 5, in the midst of a list of Adam’s descendants, we are introduced to a man named Enoch. Enoch lived for 365 years, but his life was summed up in just a few brief words:

“Enoch walked with God, and he was not, for God took him.”

“Walked with God.” That’s an epitaph that I could be happy with, and a legacy that I would be proud to have. But legacies like that don’t come about by accident; rather, they come from a stubborn, persistent lifestyle of discipleship. So all that leads to this question: What will your legacy be? Put in another way, if you were to pass from this life today, what would your tombstone say?

If you would like it to read differently, then it’s up to you to live differently.