I first read C.S. Lewis’s Mere Christianity back in 2008, and I really liked it. That has been over a decade ago now, and a lot of things have changed since then. In 2008, I was a fairly recent college graduate, was also still pretty new in youth ministry, and I hadn’t started grad school yet. I had been married for a couple of years, but was not yet a father.

So it had been a long time, and I have changed in significant ways, and I thought it would be good for me to read this classic again. I started it again last week,[1] and I am absolutely blown away with how much I am loving it this time around (I don’t remember liking it this much the first time I read it. Of the many parts that I have loved (maybe I’ll do a full review later), one has been Lewis’s description of Christianity as opposed to Dualism (emphasis added by me):

One of the things that surprised me when I first read the New Testament seriously was that it talked so much about a Dark Power in the universe—a mighty evil spirit who was held to be the Power behind death and disease, and sin. The difference is that Christianity thinks this Dark Power was created by God, and was good when he was created, and went wrong. Christianity agrees with Dualism that this universe is at war. But it does not think this is a war between independent powers. It thinks it is a civil war, a rebellion, and that we are living in a part of the universe occupied by the rebel.

Enemy-occupied territory—that is what this world is. Christianity is the story of how the rightful king has landed, you might say landed in disguise, and is calling us all to take part in a great campaign of sabotage. When you go to church you are really listening-in to the secret wireless from our friends: this is why the enemy is so anxious to prevent us from going. He does it by playing on our conceit and laziness and intellectual snobbery.

I think this is a really helpful and accurate image. Scripture is clear that we are at war—not against flesh and blood, but against evil spiritual forces. As Christians, we establish beachheads on hostile coastlines and expand into the territory of the Enemy, holding the banner of our King.

[1] This time, I am actually “reading” it as an audiobook, and it is read by a British guy. This is outstanding. 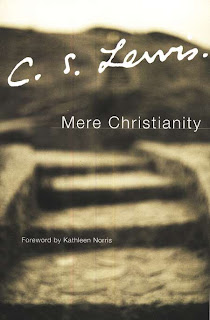 So I’m a little embarrassed to admit that I just finished reading Mere Christianity by C.S. Lewis for the first time.I was disappointed with parts of it, and completely blown away by other parts of it. It certainly is a very quotable book, and I thought that rather than offer any sort of in-depth review, I would instead share a good quote from time to time.

One of my favorite quotes in the book actually comes from the preface, where Lewis explains that his purpose in writing the book isn’t to get people to join a particular church, but rather to accept the basic tenets of Christianity. To make his point, he describes Christianity as a hall with several rooms, and says that his goal is to get people to enter the hall, and to figure out which room to enter on their own.

On choosing which “room” to enter into, he says:

“And above all you must be asking which door is the true one; not which one pleases you best by its paint and paneling. In plain language, the question should never be: ‘Do I like that kind of service?’ but ‘Are these doctrines true: Is holiness here? Does my conscience move me towards this?’ When you have reached your own room, be kind to those who have chosen different doors and to those who are still in the hall. If they are wrong they need your prayers all the more; and if they are your enemies, then you are under orders to pray for them. That is one of the rules common to the whole house.”