The Sin(s) of Sodom

Genesis 18-19 recounts the destruction of the cities of Sodom and Gomorrah, which God determined to destroy “Because the outcry against Sodom and Gomorrah is great and their sin is very grave” (Genesis 18.20). This verse makes it clear that these two cities were places of wickedness. The Bible doesn’t say much about Gomorrah specifically, but instead tends to focus on Sodom (cf. Genesis 13.12-13), probably because that was where Abraham’s nephew Lot decided to live with his family.

It may surprise you to learn that in recent years, the destruction of Sodom has become somewhat controversial because of its relation (or not) to the issue of homosexuality. In light of this, it is a worthwhile question to ask, “For what sin was the city of Sodom destroyed?”

Under the traditional interpretation of the passage, the wickedness of Sodom is exemplified in the story of the two angels (who appeared as men) who came to visit Lot in Genesis 19. The men of the city of Sodom, both young and old, become aware of these visitors, surround Lot’s house, and demand that he send the visitors out to them so that they may have sex with them.

Lot tries to dissuade the men of Sodom from this course of action, instead offering his own virgin daughters to satisfy their carnal lusts, and ultimately the angels intercede, striking the men with blindness and then telling Lot and his family to evacuate the city before its imminent destruction.

In this understanding, the sin of Sodom was homosexual activity. This is the origin of the word sodomy, a word which isn’t used much anymore but is still used in legal codes in some countries.

In more recent times, as homosexual practice has become more widespread and there has been a push for the normalization of homosexuality as a lifestyle, there has been a corresponding effort in some circles to reinterpret portions of Scripture which apparently condemn it. Genesis 18-19 and the sin of Sodom is a prime example of this sort of revisionist interpretation.

Through this lens, it has been suggested that the sin for which Sodom was destroyed was a lack of hospitality. The angels visited the city intending to stay in the town square (Genesis 19.2). Instead, Lot invited them to stay in his house, but the men of the city prevented Lot’s efforts at hospitality and tried to rape the angelic visitors instead. Essentially, the men of Sodom violated sacred cultural values by being terrible hosts, and thus, deserved destruction.

To interpret Scripture carefully and correctly, it is important to pay attention to context, and using this text as a test case, there are multiple types of context which need to be considered: the canonical context provided by the rest of Scripture, the material in surrounding chapters,  and the historical and cultural context of the incident in question:

Removing the Safety of the Story

I think this case provides a good example of the problem that arises when we force either/or conclusions on a text that does not require them. Certainly there are texts with multiple possible but mutually exclusive interpretations where only one can be correct, but this is not one of them.

Rather than speaking of the sin of Sodom, it would be more precise to speak of the sins of Sodom, because based on the limited biblical information we have, there were many:

In other words, if you were taking a multiple choice quiz about the sins of Sodom, the answer would be “E. All of the Above”. It was a wicked place. No wonder God said that the outcry against it was very great.

To conclude, I think it is appropriate to look at the story of the destruction of Sodom and in it see the condemnation of the practice of homosexuality, but it is inappropriate to use it as proof that homosexuality brings out a particular or special form of judgment from God. Instead, the message of the story of Sodom is straightforward: Eventually, God will bring judgment on sin.

And so here is my point: a lot of times I think we look at the story of the destruction of Sodom and Gomorrah as a story of judgment against “them”—wicked people who commit sins that, perhaps, are far removed from our own experiences. That makes it a “safe” story. But if we are honest with the full context, I think it requires that we look at our own lives a little more carefully.

In the context of our churches and our families, we may not be engaged in homosexuality or rape or violence, but what about the sins of inhospitality, pride, gluttony, and neglect of the poor? Are we equally innocent of these? Suddenly, the story cuts a little closer to home. It’s not as “safe” anymore. Because as the story of the Sin(s) of Sodom shows us, they all bring judgment from God.

The Fall of Man and the Sociological Consequences of Sin

July 9, 2013 / Luke / 0 Comments
In our continuing discussion of the Fall of Man in Genesis 3 and the widespread devastation of sin, we have already covered the theological and personal consequences of Adam and Eve’s misdeed; in this post we turn to the sociological fallout of that sin, or the way that sin affects our relationships with one another.
Returning to our text, we can see this dimension clearly played out in verses 11-13:

“[God] said, ‘Who told you that you were naked? Have you eaten of the tree of which I commanded you not to eat?’ The man said, ‘The woman whom you gave to be with me, she gave me fruit of the tree, and I ate.’ Then the Lord God said to the woman, ‘What is this that you have done?’ The woman said, ‘The serpent deceived me, and I ate.’”

People were created to live in community with one another. Specifically, Eve was created to be the perfect partner for Adam (Genesis 2.18-25). But when God confronts Adam and Eve with their sin, something very significant (and unfortunate) happens: the unity that had previously existed between Adam and Eve is shattered as Adam immediately blames his wife for the sin which they had committed together.
This brings a conflict and disharmony between them that would be passed down over time (Genesis 3.16), and we can see it unfold in the pages of Genesis in the accounts of numerous broken relationships—Cain’s murder of his brother, the depraved society of Sodom and Gomorrah, the distorted relationships between Sarah and Hagar, Jacob and Esau, Jacob and Laban, Joseph and his brothers, and more. But the problems certainly don’t stop there—this same conflict and disharmony continues to darken and distort our world today.
Our world is deeply flawed by sin, and this manifests itself everyday sociologically, as we treat one another in a wide array of horrible, messed up ways:
And the sum result: our society as a whole stagnates and decays, as people live lives marked by self-interest and fear of one another. The community for which we were created is broken.
Sin destroys our relationships with one another.

November 2, 2010 / Luke / 7 Comments
So I got a letter in the mail from a Christian video game company, urging me to push their products to my young people. From the perspective of LB Games, a key ingredient to the problem of young people losing their faith stems from playing secular video games, so they have developed Christian video games in an effort to use video games to actually lead people to Christ instead of away from Him.
I am probably not qualified to determine whether or not this is a good idea. Maybe this is a brilliantly modern method of evangelism, taking the Gospel to people where they already are (in front of their PC monitors, xboxes, Wiis, etc.). On the other hand, maybe it’s completely absurd. Maybe people aren’t losing their faith because of video games—maybe people are never developing true faith in the first place because we substitute things like Christian-themed video games for authentic Christianity. I don’t know.

What I do know is that despite what I assume are good intentions on the part of LB games, I won’t be promoting their products, in large part because of their headline product which they are expecting to be incredibly popular: Left Behind 3: Rise of the Antichrist. 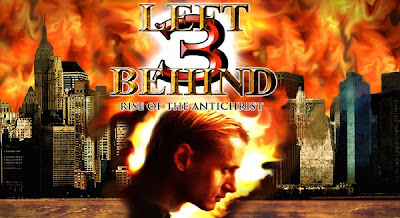 Seeing this just makes me shake my head.

In addition to the fact that I believe Left Behind’s portrayal of the end times is biblically unsound at a fundamental level, I also wonder about the strategy of evangelizing someone through a violent video game (the game is rated T because of violence, and the cover art certainly supports that idea).

With this idea in mind, the implications for Left Behind 3: The Rise of the Antichrist aren’t too promising: if you win people with a violent video game that carries the tag “Christian”, what are you winning them to?